I’ve changed the name (& direction) a few times. I’ve even tried to completely abandon. But despite my best efforts, I cannot jump ship. I have a new direction, a new vision and a renewed excitement to blog again.

To try and recap the past two years since my last post would be hilarious and ridiculously long-winded, so here’s a VERY short, but sweet little update attempt:

Baby Amelia is now Lady Amelia at the ripe old age of 2.5+

I still have MUCH LOVE for cooking, eating, community & traveling

Cheers to writing about the things I love…food, family, friends, traveling & more.

There’s always an open seat at the table. Join me ❤ 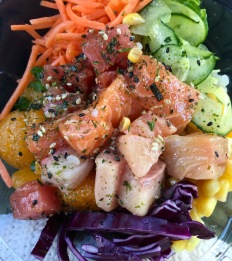 I started my poke adventures at Hi-Tide Poke & Raw Bar in Dilworth. I ordered the rainbow bowl and it was amazing. Tuna, salmon, white fish…it was great. They come in two sizes, small and large, and despite the haters saying the small wasn’t enough food, I thought for a lunch portion, it was perfect.

Next stop…Umami in Pineville and Seoul Bowl on South Boulevard.